One of three Johnny Depp movies released in 1999, The Astronaut’s Wife is definitely the weakest of the three and had me questioning my resolve to watch ALL the films Johnny Depp’s appeared in during his career.

The Astronaut’s Wife features Depp as Spencer Armacost the astronaut while Charlize Theron plays his wife Jillian. An explosion occurs while Spencer and a fellow astronaut are  conducting a space walk to repair a satellite. The ground crew and their fellow crew mates lose contact with them for 2 minutes. They are retrieved and immediately returned to earth where they slowly come out of comas, but to their wives they are changed men. Dun, dun, duuun.

The Armacosts in happier times – The Astronaut’s Wife (1999)

The directing and acting go for heavy handed including slow motion shots of glasses falling to the ground and shattering while people scream in the background and ominous dream sequences in which Jillian sees dead people. Oooh, the tension. As much as I like Theron and Depp as actors, the on-screen couple have about as much chemistry here as Angelina Jolie and her brother James kissing.

No wait, the siblings have more chemistry than Depp and Theron and that’s saying something.

Other than the central mystery of what happened during the blackout there is little driving the plot. We are continuously told by Jillian how much her husband has changed and how much he doesn’t sound like himself, but we are never shown enough of the pre-event Spencer to be able to make that connection ourself.

After Jillian becomes pregnant with twins, dun, dun, duuun things are supposed to become creepier (a la Rosemary’s Baby) but it never achieves that level of suspense for me. It plays like a drawn out episode of the X-Files, but without the redeeming forces of Agents Mulder and Scully to propel the plot and give us context.

The resolution of the plot is as heavy handed as the rest of the movie and would have had me fuming had I paid good money to see this in the theatre back in the day. Let’s face it Johnny Depp playing an asshole misses the whole point of his charm as an actor. There’s no redeeming this movie and I haven’t even started on how they play up Jillian’s history of mental health issues as a reason why no one is going to believe her alien conspiracies.

The movie faired poorly at the box office taking in less than $10 Million during its run making it one of Depp’s worst performing film given its $75 budget, and yes that includes The Lone Ranger.

Whew, thankful to have that one out of the way. Now I can move onto the third film from 1999 for Depp – Tim Burton’s Sleepy Hollow. 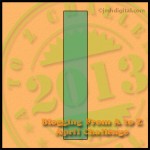 Having an active imagination growing up as a kid was a blessing and curse for me. On the one hand I could see the wonder in the mundane world around me – the mountains of snow in the parking lot near my house became an alien landscape to explore. On the other hand I was also able to imagine the worst of my fears – What if our car loses control and becomes submerged in the river? Watching Sesame Street one day as a kid, my mother turned to me and said, you’re just like that little girl and the balloon – always about the What if?.

The vignette she was referring to (embedded above for your viewing pleasure) was a morality play about how a little girl imagined what would happen if she played a prank on her friend by popping a balloon. After working through the chain of events and realizing her consequences would cause him to get hurt, she decides against doing it because it wouldn’t be nice. I think my mother’s comment was more directed at my social anxiety and tendency to hesitate in a situation until I had time to think it through first. However, later in life when the anecdote came up again I realized that my “What if?” nature is an inherent part of my imagination.

Personally I think writing is one outlet that allows me to channel some of that energy in a creative manner. Wild scenarios of “What if?” that collect in my head like dust bunnies under a couch need to be swept out and put to paper. Some of these ideas languish as fragmented scenarios waiting to be reabsorbed or reconnected to larger pieces; others find fertile ground and sprout into their own growing roots and taking off.

I want to believe

I am eternally grateful to my parents who nurtured my imagination allowing me to embrace and conceive of fantastic idea without dismissing them as “nonsense”. As I mentioned in an earlier entry, regular visits to the public library with my mother and sisters was one such fuel to my imagination. Another was my father’s casual interest in all things space related. Being an infant at the time of the Apollo moon landing, I was oblivious to the momentous occasion, but the space race must have sparked something in my father. We would often watch TV specials about space, movies about aliens and when we went to Florida when I was eight, visiting NASA and Cape Canaveral was just as high on the list as visiting Disney World. (Remind me to tell you someday about my father’s reaction to the realization that Space Mountain at Disney had very little to do with space.) Planting the seed that would make shows like X-Files resonate with me later in life, was a ‘documentary’ called The Chariot of the Gods (1970) that I caught on TV sometime in the late 70s with my Dad. It strung together a lot of “ancient mysteries” of the world, such as the Anzac lines in Peru and the Egyptian Pyramids as proof that aliens had once visited earth. Like the poster that hung on Mulder’s wall some 28 years later – I WANT(ED) TO BELIEVE.

The capacity to believe in such, pardon the pun, alien concepts, no matter how ridiculous is a gift. It allows be to believe my own BS when creating a story to the point that I can hopefully make you a believer as well. I hope that my imagination continues to serve me well in life and may it never stop generating stories that I want (need) to get down in writing to share.